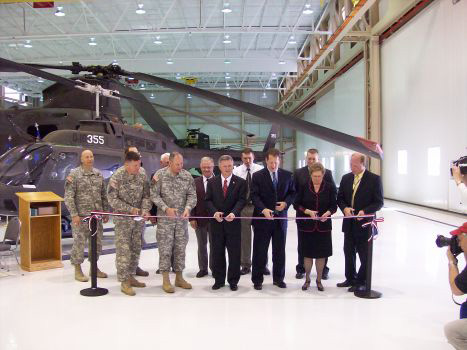 The hanger is large enough for all the Chinooks, with their duel rotors, to fit without crossing blades.The facility provides a workout room, break room, classrooms, administrative offices, instructor offices, a flight operations room and a heated maintenance area. The hanger is located on 40 acres on the east side of the Central Nebraska Regional Airport.

Also in 2014, a new National Guard Readiness Center is expected to be added to the aviation facility campus.

The Guard has been an onsite presence at CNRA since 2004 with The chinook CH-47SD, the most advanced model of the world’s most efficient heavy-lift helicopter. Known as the Muleskinners, the B Company / 2-135 Aviation (Chinooks) Company take their name from the mule train and muleskinners of old who were noted for their ability to move heavy loads over rough and difficult terrain. Today’s Muleskinners are noted for the same ability, but the slow moving mule train of the past has been replaced by the tandem rotor helicopter known as the CH-47 “Chinook”.

In 2005, CNRA became the airport of choice for the Guard to practice approaches for pilots flying the KC-135 Stratotanker – the military’s primary refueling plane. Training includes spiral approaches—critical in Iraq and other countries where airfields have minimal protection.

The Central Nebraska Regional Airport is proud to have been selected as the site for the Nebraska Army National Guard.